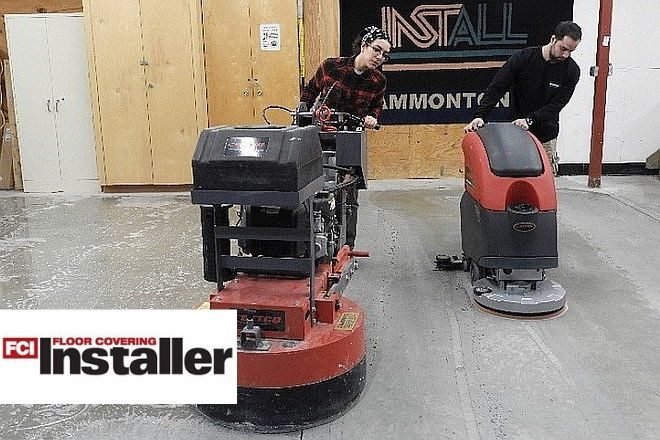 The Future is Female

Every day thousands of women play a critical role in the floorcovering industry. From installers to project managers to business owners, they bring a unique perspective and hard-earned skills to the jobsite.

While major strides have been made to increase the number of women in skilled labor, it is still vastly disproportionate to the population- including the floorcovering installation field. It’s not uncommon for a female installer to be the only woman on a project – but that is starting to change.

In recent years, major efforts have been made to attract more women to the trade through training programs and initiatives that encourage solidarity and community. These events not only bring talented women together, they showcase the lifelong career possibilities for a new generation of members entering the industry.

An 85 Year Commitment to Creating a More Inclusive Industry

Since October 1935, when Margaret Ellings became the first woman initiated into the United Brotherhood of Carpenters (UBC), women have been strong and active members. The establishment of a Women’s Committee within the UBC was one of the most important developments in the organization’s history, bringing more women to positions of power and providing an opportunity for their voices to be heard.

An era of more concerted action began in 1998, when the first local Sisters in the Brotherhood (SIB) committee was formed. Shortly after, the UBC held its first Women’s Conference in 2002. Since then, women in the trade have found common ground with one another at networking events and training sessions and have expanded to dozens of committees with a wide range of activities and missions.

One of these missions was working with numerous entities in the Department of Labor to address regulatory and enforcement issues to increase diversity in the trade. Another included developing a partnership with Helmets to Hardhats (H2H) to assist women who are interested in working in construction after leaving the military. Women leaders have even helped pass an ordinance that created an online database showing compliance with hiring goals for diversity in the trades.

Another major commitment to creating a more inclusive industry came just a few years ago, when SIB became a national campaign – and key priority – for the UBC. Through expanded outreach programs and major recruitment events, the organization has doubled down on its support of women. It has accomplished this by providing assistance in obtaining craft training and leadership skills, by being advocates on women issues and by mentoring new members and even potential members.

Today the goals of SIB remain the same as they did the day it was founded. By creating a network of active women installers, providing avenues for women to eliminate barriers to their success and promoting an increase in the numbers of women in the UBC – we can all build a stronger industry.

One area of opportunity outlined by SIB is recruiting female veterans to join the trade after they retire from active duty. While daunting to some, entering a skilled trade is not a big departure from the day-to-day reality of women in the military: hard work, discipline, productivity, and a competitive spirit. That’s why the UBC and INSTALL have long encouraged America’s veterans to share their courage, commitment, and experience.

In 2016, INSTALL and H2H forged a partnership calling on INSTALL contractors to sponsor veterans with the goal of bringing new skilled workers into the floorcovering industry through an apprenticeship program. H2H operates in both the United States and Canada with two complimentary, but independent programs that connect National Guard, Reserve, retired and transitioning active-duty military service members with skilled training and quality career opportunities in the construction industry.

The goal of the program is to help military service members successfully navigate the journey back to civilian life by offering them the means to secure a quality career in the construction industry. Since its launch, the partnership between INSTALL and H2H continues to gain traction throughout North America.

Women are able to apply to the program year-round and INSTALL is helping them succeed in all stages of the program, from application to completion.

Voices from the Industry

H2H is just one example of how the industry is recruiting new members. But there is no right time to become a trained and certified installer, journeywoman or project manager. Just ask Heather Jones. Jones is an installer for Smith Flooring Inc., a woman-owned INSTALL Contractor that serves the Greater Philadelphia region. After a professional career that spanned nearly 20 years, Jones decided she needed a change.

“I’ve always been outdoorsy and love working with my hands,” exclaimed Jones. “I wore suits for many years, but needed something that was going to challenge me. Acquiring new skills pushed me to work harder and smarter.” Jones graduated her apprenticeship at 46, but that hasn’t been a limitation in any way. In fact, she has experienced nothing but encouragement from her superiors and peers. The women I have encountered have worked really hard to be the best installer they can be. If you show your peers you are skilled and hardworking, it doesn’t matter if you’re a man or a woman – people will respect and trust you.”

Jones is also quick to call out the impressive benefit package that INSTALL members receive – a major selling point to would-be installers thinking about joining the industry. “Not only am I trained to work on a variety of different jobs and installations, I receive a competitive wage, have great health insurance and many other benefits not available in many other careers” she added.

While her grandfather and father paved the way for her foray into flooring, Smith first pursued a career in healthcare, completing a program in nursing and obtaining her EMT and firefighting license. “I was raised to be independent, and while other industries seemed attractive at the time, installation kept calling my name,” said Smith. “The men on my team have been nothing but supportive and Metropolitan recently hired a second female installer.”

“I’m not a traditional learner, so working with my hands and seeing an installation in person is a major benefit. My teachers have done a great job encouraging me to ask questions, get involved and learn about different types of flooring I wouldn’t otherwise see on the jobsite.”

The Future of Our Industry

As the floorcovering installation industry – and skilled trades in general – continue to struggle with a labor shortage throughout the country, women remain an important part of the solution. There is a vast population of untapped talent who have the ability and mindset to join our industry.

Part of this solution is overcoming the notion that installation is a “man’s world.” It hasn’t been for 85 years. Just look at Margaret Ellings, Heather Jones and Heather Smith.

“Now is the time to get involved,” concluded Jones. “Get to know your local leaders, get involved in networking events, help out with industry non-profits, benefits and charity jobs, and share your story with other women,” she added. “We are our own best advocates.”