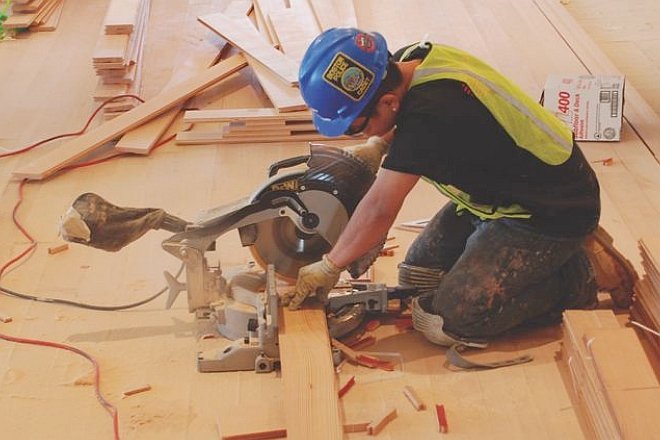 Why do people quit a job? Or worse, why do they leave an entire industry behind just to start over in a new one? There are no simple answers to these questions, as the topic of employee retention is a complicated and tricky equation with a number of moving parts.

With an aging installer population and a booming economy, there is an urgent need for labor. However, while retention remains strong for INSTALL members, other businesses and independent contractors continue to struggle to keep talented, dependable and trained workers employed long term.

Regardless, it’s an issue that can be solved with the right combination of benefits, growth opportunities and lifelong education and training. Floorcovering professionals say goodbye to our industry for a variety of reasons but leaders in our community have found solid methods to prevent it.

One of the most important things to understand about the building, construction and floorcovering industries is the fact that they are cyclical in nature. Construction spending goes up and down, sometimes fast enough to make your head spin. But those who have been around long enough know how to predict and ride these waves.

“One way we have tried to combat this is by developing and offering a variety of specialized training and education programs that help installers be as nimble as possible,” said Tom Lutz, director of INSTALL Michigan. “If you are a sheet goods installer and spending goes down, you can be retrained in carpeting or hardwood.”

With nearly 25 years of experience in the industry across a variety of roles, Lutz has seen two major recessions and the burst of several economic bubbles. “The fact is that our industry can be unpredictable, trends come and go, and nobody has a crystal ball that tells us the future,” he explained.

“That’s why there is a lifelong commitment to free training,” added Lutz. “At one time, carpet had a much higher market share in North America. Now hard surfaces and polished concrete are seeing shifting demand. We have relationships with manufacturers to keep people marketable and employable and we will continue to develop this into the future.”

This is in stark contrast to independent contractors and subcontractors. While they can operate with lower costs and quick turnaround times on small jobs, it’s hard to maintain a successful and profitable business without the skills and training demanded by facility managers, interior designers, and general contractors.

“When times are tough you are tested as a company and as an employer,” said David Meberg, president and CEO of Consolidated Carpet, an INSTALL Warranty Contractor. This third-generation family business serves the greater New York City metropolitan area and has expanded over the last 75 years to become one of the largest full-service floorcovering contractors in the industry. Meberg is not only facing competition from contractors outside of INSTALL, but his company has had to address local regulation regarding the apprenticeship training program. In New York the state has a tight grasp on apprenticeships, meaning that contractors have little say in the process.

A Lack of Benefits

Another major contributor to low retention rates in the floorcovering industry is a lack of benefits. From medical coverage to competitive retirement benefits, employees are looking for a combination of assistance that helps maintain a healthy, stress-free life.

“Whether you know it or not as a young man, you will need a variety of benefits throughout your lifespan,” said Lutz. “This is a major difference between us and non-union shops and installers. Non-union workers might be getting paid cash, job for job, but with us you have benefits that continue to grow with you. The result is you have the security of knowing that you will have a support system well into retirement.”

This is a major reason why people stayed with INSTALL during the Great Recession last decade. It’s hard to walk away from a pension and healthcare benefits for your family, and even though times were tough, and people were out of work, a long-term connection to the industry was fostered because of these benefits.

The Physical Demands are Real

It is also important to address the reality of floorcovering installation:  it’s just plain hard work. The physical demands are tough on young installers, let alone men and women who have been on the job for 20-30 years. For non-union installers, the stakes are even higher. Not only are they often running an independent operation, a career-ending injury can be catastrophic.

“Sometimes our team members get through 30 years without injury or hardship, but this is far from the norm,” noted Lutz. “This is one of our biggest challenges when it comes to retention. While some people end their installation careers because of wear and tear on their bodies, they have great insurance and the option of early retirement. This isn’t something that happens with non-union labor.”

While the physical demands of installation work can be overwhelming, training and education from INSTALL means that installers and journeymen have a wealth of opportunities outside of this one-time role. From estimating to project management, there are numerous options for them inside the installation industry that are not as physically taxing. And if that’s not the best path for them, they are able to apply their skills in other ways.

“I recently had an employee who was injured on the job,” explained Lutz. “He was given a project manager opportunity but was approached to become a subject matter expert with a partner company. The choice was difficult, but he ended up in a technical specialist role at one of the largest underlayment manufacturers in the country.”

Stuck in a Rut

Another major reason why people leave the industry is lack of growth. Thankfully, there are now development systems in place that help advance installers and employees into the next generation of leaders. After all, it’s not always the money or the benefits. Sometimes people want to achieve their own destiny.

“There are ways to cross-train people so that they can take a career path from installer to foreman/estimator/project manager to flooring subject matter expert and more,” said Lutz. “We have a long history of our people becoming contractors and leading the charge for the next generation of our industry. This ultimately leads to more industry retention because you can see a future for yourself when you are just starting out as an apprentice or installer.”

The floorcovering industry also has mentoring programs that help people who are struggling or aren’t sure if floorcovering installation is for them. “When a new member goes out into the field for the first time, we have someone at the apprentice school and a business agent from our council who reaches out and follows up with them regarding benefits, the pension system, their contract, questions, and more,” added Lutz. “This is called new member retention. We invest in reaching out to them and making them feel like they are part of the family.”

“We’ve had installers come to us from non-union jobs, and they try and knock the door down to get involved,” concluded Meberg. “We have had people leave to start their own business, but they don’t leave the trade. When INSTALL guys see other installers that find a new career path with manufacturers or project managers, it gives them hope and an excitement for the future and potential for advancement.”

Find a Balance Between Happiness and Success

No matter what you do as a business owner or manager, you will still have people that leave jobs, careers and the industry for other opportunities. However, INSTALL continues to contribute steadily to increasing retention rates in the floorcovering industry. It also helps teach an important lesson in investing in training and certification to other trades.

If a person’s happiness and success mean finding another job, then it’s hard to fault that person. But through a combination of benefits, growth opportunities and lifelong education and training, we are fighting to increase retention and create a stronger, healthier and more prosperous industry.

Don’t fear the future. Embrace it.